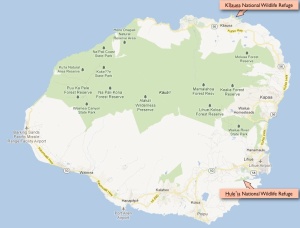 The USFWS (US Fish and Wildlife Service) rangers organized several guided hikes for the public to see parts of the Kaua’i wildlife refuge lands that are very rarely open to anyone outside the Service.

The groups were limited, with reservations required, and the places were all filled very quickly. So the rangers also provided additional guided hikes for the volunteers. Lucky us! 🙂

For the first of the two hikes, last Tuesday, my friend Alice and I planned to carpool ‘down south’ to join a kayak/hike group on the latter hike portion of their Hule’ia National Wildlife Refuge (NWR) tour. 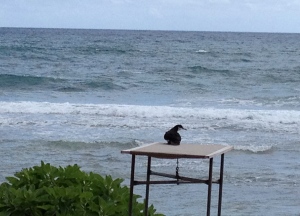 Fortunately, Alice (thank you so much, Alice!) had learned that the Save Our Shearwaters team, with the help of a class from a local school, were planning to release a number of Newell’s shearwaters. Typically, at this time of year, these are injured or disorientated fledglings that have been rescued and nursed back to health. 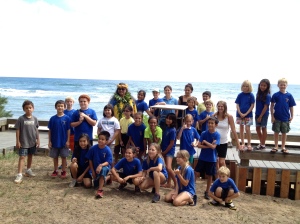 So, we left Princeville early and headed to Lydgate Park on the East shore, arriving just in time to see the last of seven birds that day sitting on the release platform and surveying its surroundings (we would have been a tad-plus-a-smidgeon earlier, but yours truly remembered she’d forgotten her hiking shoes, which resulted in a 10+ minute round-trip delay – sorry, Alice).

Less than a couple of minutes after our arrival, we witnessed Newell’s shearwater #7 spread its wings, take off and confidently head out to sea – what a cool sight! 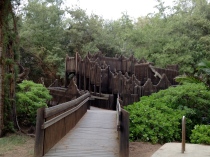 So, of course we had to check that out before heading to the meeting point at Nawiliwili small boat harbor (with just a minor detour to Costco for a restock of alcohol as requested by ‘him indoors’)! 😉

The hike took us through the wetland area that was once a network of Hawaiian taro fields, but is now maintained for the endangered wetland birds, as well as to preserve the Hawaiian cultural history.

Mike Mitchell, Deputy Project Leader at the US Fish and Wildlife Service, ‘talked story’ as we wandered through the refuge, pointing out native and invasive plants and detailing the effort that was required to restore the wetlands after many years of disuse, as well as the ongoing maintenance.

The refuge is tucked away inland to the west of Nawiliwili Harbor and the Menehune Fishpond, with the Hule’ia river bordering the refuge to the south.

It was a wonderfully serene, quiet area, with the only outside noise coming from an occasional and distant helicopter…oh, and one microlight (which Alice told me she’d once experienced, which made me rather envious).

On Wednesday and Thursday afternoons, I was back at the lighthouse for my regular volunteer sessions. Although many of the visitors were unaware that it was NWR week when they first arrived, there were plenty of large posters and additional information for them to learn about all the refuges throughout Kaua’i, Hawai’i, and the other States.

On Friday afternoon, we were treated to a final volunteer-only hike to Crater Hill, part of the Kilauea NWR that includes Kīlauea Point, with its lighthouse, then spreads to the east along the coast.

We saw the colony of red-footed boobies from a completely different angle than we usually observe from the lighthouse, and were able to get much closer to them. 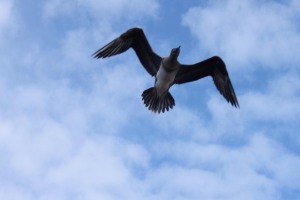 We sat for ages on the hill, watching the adults and juveniles soar around us, and learning fascinating details about our Kaua’i seabirds from Beth Flint, FWS SeaBird Biologist. Boy! She was a wealth of knowledge, and so entertaining with it! She’s based in O’ahu, but I do hope she’ll return to us for future hikes.

Then we wandered across the cliff top, with fabulous views along the coastline, as well as across Kilauea.

We saw wedge-tailed shearwater chicks nestled in their cliffside burrows, loads of red-footed boobies, white tailed tropic birds, and great frigatebirds, including a large group of males (surprisingly, since at the lighthouse we see predominantly females and very few males) soaring around the cliffs.

Oh, and we were thrilled to spot a stingray, way down below us in the ocean close to shore. I snapped a photo of that too, but you wouldn’t thank me for subjecting you to it…it just looks like a small black dot; still, I know that dot’s a stingray!

After the hike, I helped Sheri, one of the rangers, set up for the free movie night that the USFWS had organized for the entire community at the old Kīlauea Theatre (now home to the Calvary Chapel). I grabbed a tasty pannini (to go) from Kīlauea Bakery (love love love their website!), and then enjoyed the show with the rest of the crowd.

The first of two movies was a recent short documentary called ‘Endangered Hawaii’, narrated by Richard Chamberlain and highlighting the plight of Hawaii’s endangered birds, including many species that are sadly already extinct. It was particularly interesting for me to see several familiar faces from the USFWS who were interviewed for the documentary, with many shots of Kaua’i including the refuges we visited earlier in the week. If you’re interested in the demise, but more importantly in supporting the protection, of these species, please purchase and encourage others to enjoy the DVD.

The feature film was ‘Oceans’; a Disneynature film released in 2010 (enjoy some spectacular clips in this trailer on YouTube). This movie was narrated by Pierce Brosnan. The narration was a tad slow-moving at times, but the underwater cinematography was truly remarkable, and left me utterly bewildered as to how they were able to capture many of the shots (that is, when I even remembered that a camera was there)!

Well, that’s another week of my life gone – kaput! Still, it was certainly interesting and thought-provoking, and one that left me with many impressions and fabulous memories, so I guess I shouldn’t complain too much at the speed of its passing!

October 14-20 is National Wildlife Refuge Week in the U.S and, to celebrate the first day, Kilauea Point NWR held another fee-free day on Sunday.

For anyone reading this who is local, there are many other interesting events planned for the week, including hikes to areas that are rarely open to the public. Check out the activities here.

The Refuge has kindly organized separate sessions, for volunteers only, for us to enjoy two of the guided hikes (Hule’ia to the south of the island, and Crater Hill which overlooks Kilauea Point). I haven’t yet had the opportunity to explore either, so I’m very much looking forward to both, on Tuesday and Friday. 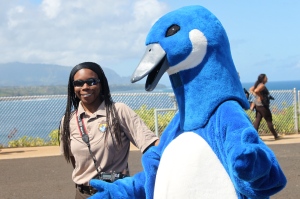 Similar to the recently Nene Awareness Day, Sunday provided plenty of activities for the young-in-age and young-at-heart, as well as another appearance by Puddles the NWR Mascot.

Rumor has it that the rangers draw straws to determine the poor s*d who has to endure that costume in the Hawaiian heat! 😉 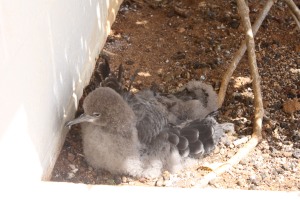 The oldest of our (visible) Wedge-tailed Shearwater chicks made a special effort to welcome the visitors by venturing out from the comfort of its nest behind a tree.

He (or she) is changing daily now, losing its grey fluff-ball appearance and gaining its flight (wing and tail) feathers, ready for fledging around mid-late November.

It was a beautifully sunny day at the Point, which encouraged a good number of visitors early in the day. After the recent lack of rain and trade winds, we had had a welcome dump of rain overnight, which freshened the ground and the atmosphere.

The sea was once again a pristine turquoise in the bay, and a pod of spinner dolphin made an appearance, to the delight of the crowd!