Nothing – not any blog post, video, nor friend’s personal account – could truly prepare me for my arrival on Midway! As we taxied in the dark, the runway was bordered on both sides by the ghostly shapes of countless nesting Laysan albatross, while Bonin petrels flitted across the sky.

We were ferried in a couple of extended golf carts from the runway to our lodgings in Charlie barracks. On the way, we often had to avoid an albatross sitting in the middle of the road. Petrels constantly circled around us, attracted by the headlights, and one flew into the cart, settling on the floor at our feet. We gently placed it back on the ground; no harm done!

At Charlie barracks, we were welcomed by a number of cheerful staff, who are no doubt used to the delight and amazement of incoming volunteers. After a brief orientation regarding house rules and regs, we headed for bed. All windows have blackout curtains to avoid birds flying into the glass so, with lights out, I peered out of my window… 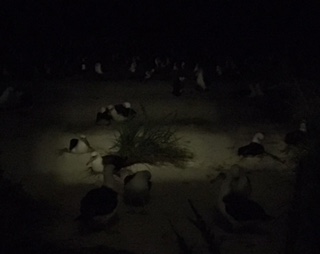 Later, much later, I drifted off to sleep to the ‘tune’ of whistling albatross.

Saturday, our first morning, a few of us headed out to the beach before breakfast, and enjoyed watching dozens of albatross accelerate down sandy runways to launch themselves into the air and head out to sea. 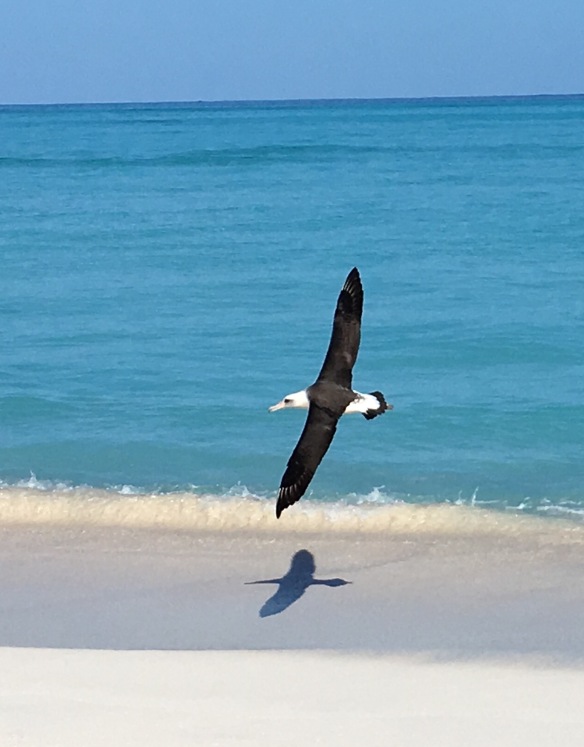 After breakfast we were each issued with a bicycle for our stay. They are all foot-brake bikes, which didn’t thrill me, but I managed the first day without falling off (which should make Mary Mair smile if she’s reading this, as hers has caused me some angst in the past)!

After a detailed and informative orientation meeting, our team leaders gave us a tour of the main island, Sand Island. Albatross cover the landscape in all directions!

Charlie barracks is in the distance;  Bravo barracks to the right is abandoned

In the afternoon we had our first taste of counting. The three islands of Midway Atoll are divided into sectors…there are 60+ sectors of varying shapes and sizes to be covered over the next three weeks. We managed just 2 on our first day! However, we soon got the hang of the system and were able to speed up as the afternoon progressed.

We were done around 4:30pm. Time for a much needed shower before dinner (5pm-6:15pm), followed by a walk on the beach at sunset.