And so the world turns!

November is the month that the Laysan albatross return to Kauai to mate, nest, and raise their young…well, some of them will raise their young, while others, like our pair of females are more hopeful than successful.

Last year I posted the tale of our two. We were fascinated by their behaviors, since that was our first year in residence. This year we were delighted when they returned to our yard to try again. It’s a special day when the first albatross of the season is spotted in our neighborhood. This year the first one was about a week earlier than usual, November 4, but our two always seem to be among the later arrivals.

So it wasn’t until November 23 that 338 arrived back in town after spending the summer months somewhere off the coast of Alaska. 643 was just a few days behind her, arriving November 26. They spent the next day close together, clacking, whistling happily, and preening one another. They also scoped out some potential nesting sites. 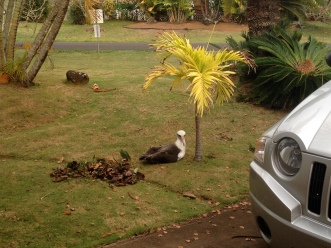 They seemed no more savvy about their nest location than before! Last year they ended up at a low point of our front yard to the right of the garage (after 338 followed one of the eggs that had rolled down a slope and ended up just a few feet from the driveway).

This year they chose an equally unsuitable spot…deliberately, it seems! 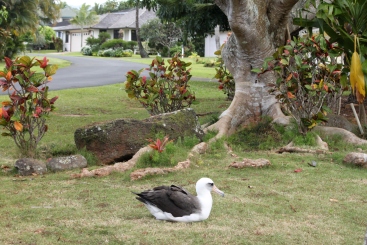 We were optimistic when 338 initially began hanging around on our front yard near our huge Poinciana tree. We hoped she’d snuggle into the side of the tree, on a flat patch, where the long established roots might provide a safe haven for her and her egg… 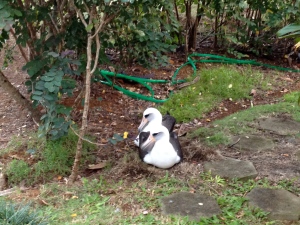 Together, they moved downhill, closer to the house (on the left hand side of the drive this time), and seemed intent on squatting in what we considered to be the least appropriate spot of the yard, where, during winter downpours, the storm waters gush off the driveway. Not the most comfortable spot to set up the family home.

Once an albatross pair have met up in November and (in the case of a heterosexual couple) have enjoyed their roll in the hay, they both fly off again for a week or so, for their albatross equivalent of a baby-moon. 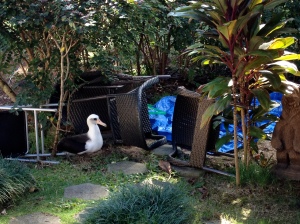 So, while our girls were away, Steve (with the blessing of our local albatross guru, Cathy) laid a tarp and a chair barrier, as a form of gentle persuasion (for their own good!) to find a more suitable location. 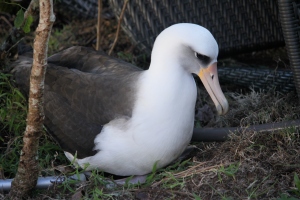 However, bird-brained or doggedly persistent, whichever, when 338 returned on December 3 she was pretty determined to find a way back to that same spot.

…even if it meant sitting on a chair leg! 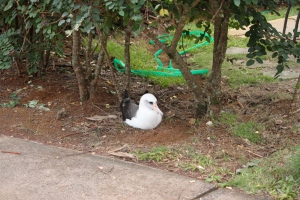 Eventually, though, she grudgingly conceded defeat…sort of! She settled just a couple of feet away on slightly(!) higher ground but even closer to the drive than last year and, sometime overnight, laid her egg**.

643 showed up the following day, swapped with 338, and promptly laid her own egg.

As is fairly typical for all-female partnerships, since they can  successfully incubate only one egg, she forced one of the eggs to the side, giving Cathy the opportunity to remove the abandoned cold egg. 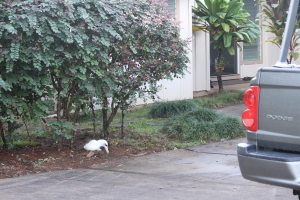 So now 643 has settled down to take the first long shift while 338 is away at sea, feeding and building up her strength for the second incubation stretch.

Sadly, yet again this year, there is no plan to provide PMRF adoptive eggs to the Princeville nesters, so our two girls will eventually give up hoping for a chick and, sometime early year, will leave the egg and us for their Summer in Alaska.

…and so the world turns!

** Having reread my blog post from last year, I was interested to note the role-reversal: last season, 643 was the first to return and lay her egg, on December 3, followed by 338 the following day. I’ve no idea if rotating the first arrival is a regular pattern…I guess I’ll need a few more years’ research to see any pattern emerge! 🙂