I’ve been slacking on the blog-posting, so am trying to make time to catch up on the past few weeks, but it’s difficult! This retirement lark, on a beautiful island in a warm temperate climate with albatross and whales now arriving for another season, is a full time job. 🙂

Mid-November, I made my first trip to the island of Hawai’i (aka the Big Island), and spent a long weekend on the west side. I’m already looking forward to a return trip with Steve sometime, to explore Hilo to the east and the Kilauea Volcano – I hear that a night visit to watch the lava flowing into the sea is spectacular.

The Keauhou Lavaman triathlon was taking place just south of Kona, and our friend, Erich, was Head Coach for the Team in Training tri team this season. 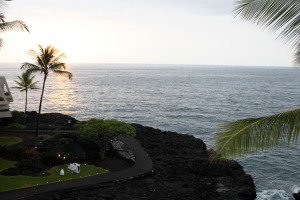 So, I ‘bunked with’ with Erich, Ellen and baby Gabrielle in their hotel room. It was a pretty cool ‘squat’, as we had an ocean view at the Sheraton, with nightly entertainment from the huge manta rays that come to feed in the bay immediately below our room.

The lava-rock cliff by that bay is also used for private (well, maybe not so private) torch-lit dinners. Personally, I’d prefer a rather more secluded spot, as opposed to being overlooked by a hundred-plus balconies.

The four of us had united at Kona airport on Thursday – with me making the island hop from Kauai, via Honolulu, and the three of them flying in direct from San Francisco.

There are plenty of places to grab a meal at any hour in downtown Kailua-Kona, including Humpy’s, a lively sports bar/grill where we ended up in the middle of Thursday afternoon.

On Friday, we all took the opportunity to drive north together, in search of King Kamehameha I’s birthplace. There is no sign from the main road, so we crisscrossed very close to the site several times without actually seeing it. 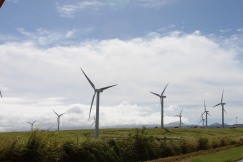 During our meanderings we did, however, happen upon the Hawi Renewable Wind Farm and Upolu Airport, at the end of a narrow country road (imaginatively named Upolu Airport Road). By the time we discovered the birth site was merely a short hike from the airport, we were already some miles away and it was pouring with rain, so there wasn’t much support for retracing our wheel-treads for the umpteenth time.

We were pleased we continued to the end of Akoni Pule Highway (Hwy 270), as we were rewarded with an amazing view (even on a foggy windy wet day) across Pololu Valley, and, as we backtracked through Kapa’au, we found the impressive statue of Kamehameha I at the North Kohala civic center. Throughout our search, we were indebted to Ellen and her iPhone apps for shedding historical light on the area as we traveled. So the trip wasn’t a complete cultural failure.

Kamehameha I’s statue in particular has a fascinating story. The Wikipedia page is definitely worth a read. However, in brief, the full-size brass statue was initially commissioned and intended for Honolulu, but was lost when the ship transporting it sank near the Falkland Islands. A second statue was cast, but the original was unexpectedly retrieved, and ended up at Kapa’au.

We took a different route for the return to Kona, along Kohala Mountain Road (Hwy 250) to Waimea.

The landscape quickly changed to hills and farmland, with extensive views to Mauna Kea.

As we headed south, we experienced large exposed stretches of windswept terrain, including at one point a surprising patch of cactus.

I should give a shout out to the Red Water Cafe, in Kamuela, for a delicious lunch (and an additional shout out to Ellen for finding it with her Yelp app). 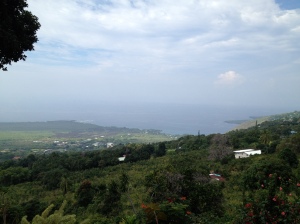 On Saturday, Erich had Head Coach duties back at base, so Ellen, Gabi and I headed south without him.

We started with an excellent breakfast at The Coffee Shack. The cafe is positioned high above the valley, overlooking Kealakekua Bay. From the lanai we had delightful views of the bay and the cafe’s garden.

We also discovered a large number of the most attractive geckos I’ve ever seen, the gold dust day gecko. Although, our delight was somewhat tempered by the discovery that they are an invasive species that are killing off the indigenous population!

This church was originally built in 1842 and located near the shore of Honaunau, but gradually the villagers moved further inland to cooler, more fertile area; in 1899, the priest at that time decided the church should move too. So the church was dismantled and relocated higher up the slopes of Honaunau.

The Belgian priest, John Velghe, was a self-taught artist and single-handedly painted murals on almost every interior surface. Sadly, he died before the project was completed, so some panels remain blank.

Apparently the paintwork has never been retouched, which is remarkable considering it dates back to the late 1800’s and he used ordinary house paint.

The cemetery is surrounded by attractive tropical plants and flowers, overlooking the ocean. I can think of worse places to be dead!

From there we headed to Pu’uhonua o Hōnaunau National Historical Park (The City of Refuge). This was a treat mainly for me, since Ellen had visited on a previous trip, and so spent most of our stop twiddling her fingers (I assume) while Gabi enjoyed her afternoon nap in the car.

It’s a fascinating site that’s been restored to show the layout and buildings in what were once royal grounds (for the chiefs of Kona) and the dividing wall that separated it from the Pu’uhonua, where people found refuge after war or breaking a kapu (religious law).

It took me well over an hour to complete the excellent and very detailed self-guided audio tour; there was so much information to absorb and views to enjoy.

From there, we drove north along City of Refuge Road. The map warns it’s a single-track beach road, so I’m not sure I would have attempted it without 4-wheel drive; however, we were surprised to find a well-paved stretch of straight road, with views on either side to ocean and hills.

We stopped at Napo’opo’o Beach Park, which has an impressive Hawaiian temple, Hikiau Heiau, and a distant view to Captain Cook’s monument (accessible only by kayak).

Our final visit (apart from a brief stop in the little town of Captain Cook, to purchase some Donkey Balls!) was to Greenwell Farms.

The way coffee is grown on the slopes of Kona is very different from in Kauai. In Kauai, the coffee trees stretch for many acres across flat lands, and the ripe cherries can be picked by large machinery. In Kona, however, coffee is grown in small hillside lots, five acres or less, among residential areas, and the trees are hand-picked.

Individual farmers then either process their own coffee manually, using a small hand-cranked press, or sell their sacks of coffee ‘cherries’ to larger enterprises, such as Greenwell’s. 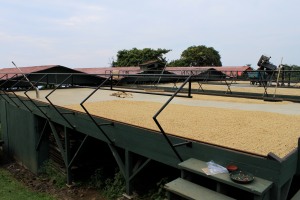 They were in the middle of their harvest, and we joined a 20 minute tour of the grounds, including the processing plant where we saw large sacks of cherries being processed, and coffee beans spread out across huge racks to dry.

The big event was on Sunday, November 18. The participants were up at 5.30am, setting up their bikes and other equipment/clothing at the transition point.

At 7am I joined them as they entered the water at Keauhou Harbor and headed out to the water start (among the rest of the colorful bobbing heads you see in the photo). Erich and I cheered from the harbor wall. 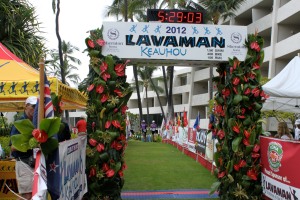 Several of the Team in Training participants were taking part in their first triathlon and it was inspiring to watch them cope so well with the three disciplines.

We were at the finish line to cheer them in and help them celebrate. They deservedly enjoyed a big party in the Sheraton grounds.

So, that was my first visit to the island of Hawai’i. Too brief to experience the whole island, but that’s OK, as it leaves plenty to enjoy on future trips, and happily we’re only a couple of island hops away.

3 thoughts on “First trip to (the island of) Hawai’i”